This is a working title for an initiative that is developing to follow the Understanding Predation project.  To help develop the concept, one or more workshops are being proposed in early May to gather views from as many people as possible about the sort of initiative that would match the range of different aspirations amongst stakeholders.

A save-the-date notification has been placed on the Moorland Forum website and anyone with an interest in the potential of this work is invited to indicate which of the three workshops they would like to attend.  A decision about which workshop to run will be made in response to demand - please complete all the workshops you will be able to attend.

Email ThisBlogThis!Share to TwitterShare to FacebookShare to Pinterest
Labels: Waders 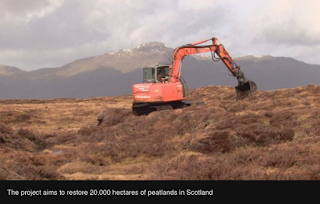 The Peatland ACTION fund received a further £8 million from the Scottish Government, in January. The investment allows the Peatland Action Fund, which is administered by Scottish Natural Heritage (SNH), to continue working with its partners and restore a further 8,000 hectares of this precious peatland habitat in Scotland, during 2017/18.

The fund is open for applications on 1st April but the project team would like to hear about proposed projects now. Updated application requirements and guidance are available from the Project webpage.

In this phase of the project, there is an emphasis on extending the geographical reach to the Western Isles, and for further contractor training. More information will be become available in due course through updates on the project's webpages and posts on social media accounts: @SNH_Tweets and @ScottishNaturalHeritage

The Scottish Government has issued a press release.

A BBC News article includes a video clip with the voice-over provided by Andrew McBride, the Peatland ACTION Project Manager.