Meeting with the Director, Environment & Forestry

On 24 July, the Chairman and I met Bridget Campbell, who is Bob McIntosh's successor as Director, Environment & Forestry in the Scottish Government.

The aim of the meeting was to introduce Bridget Campbell to the Forum and to bring her up to date with ongoing work and future plans.  She was keen to be kept informed about the Understanding Predation project, and our plans for the launch of the Report in February 2016. We also covered the Land Reform Bill and Bridget Campbell will make sure that the Bill Team is aware of the Forum's offer to advise about possible unintended consequences.

A list of Agenda items and notes from the meeting are available to download.
Posted by Simon Thorp at 09:12 No comments: 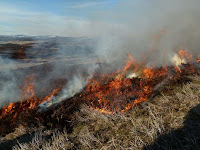 A new study led by the RSPB Centre for Conservation Science has revealed the extent of moorland burning across Britain’s upland areas. This is the first time upland burning has been mapped in detail across mainland Britain.

Using aerial photography and satellite images, 45,000 1-km squares were mapped across Scotland, England and Wales, and revealed that burning occurred across 8,551 of these squares, including 5,245 squares in Scotland.  In the ten year period covered by the study from 2001 to 2011, the number of burns recorded increased rapidly by 11 per cent each year.

For more information see the RSPB press release.  The paper has been published in Biological Conservation.  The abstract of the paper can be viewed online and the full paper is available to download for a fee.

This paper, and others like it, will need to be considered as part of the review of the Muirburn Code.  Our understanding of the uplands has improved in many areas since the current Code was published in 2001, but the expansion of our understanding of peatland has been the biggest area of change.
Posted by Simon Thorp at 06:40 No comments:

The Understanding Predation project aims to capture the views of as many people as possible. While the project will welcome responses from organisations, it is personal views that count most. The project wants to hear what individuals think, not just what organisations would like their people to think!

Have you completed a questionnaire yet, and have you done enough to draw the attention of colleagues, members and/or supporters to the opportunity that the questionnaire offers people to express their views?  The questionnaire responses will influence the final report from the project. 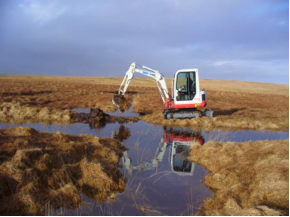 Scottish Natural Heritage (SNH) was allocated £5 million to spend on:
The Peatland ACTION project was established to respond to this challenge in the last financial year, and work was funded across 107 sites throughout Scotland.  Building on this success, the allocation of a further £3m, to spend before the end of March 2016, will allow the Peatland ACTION project to extend the amount of restoration work that can be carried out.

Applications for Funding
Details about how to apply for funding for peatland restoration work are available from the Peatland ACTION part of the SNH website.  The closing date for applications is 17 August - if this is of interest you need to act now.

Email ThisBlogThis!Share to TwitterShare to FacebookShare to Pinterest
Labels: peatland 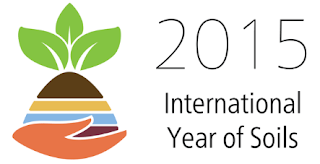 This Sharing Good Practice (SGP) event forms part of a programme of activities under the Scotland partnership for promotion of UN International Year of Soils 2015 (IYS2015). IYS2015 provides an opportunity to take stock and reflect on examples of sustainable soil management that exist in Scotland and where gaps in information and resources occurs.

SGP events are fully participatory events where participants can learn about and share practical issues relevant to their own particular roles and activities and discuss their resource requirements and help to identify resource gaps. This event will specifically cover awareness of soil issues and demonstrate the breadth of information and tools available. The event is aimed at ‘those who have responsibility for soil and its sustainable management in Scotland’. In particular - land managers, advisors, researchers, public agencies and NGO’s.

Event Objectives:
The event flyer and booking form are available on the SNH website.
Posted by Simon Thorp at 17:59 No comments:

The Understanding Predation project is in full swing. Over 300 questionnaires have been received although there is still plenty of time for more questionnaires to be submitted.  The workshops are in full swing and these will continue until the end of July.  The bibliography for the final report has been prepared, and this will be published on the Project’s webpage, next week, along with an explanatory post on the Project's blog.

A full update on the progress of the Project will be submitted to the Steering Group, next week, and the Group will be asked to confirm that this satisfies the requirements of the second milestone.

All members of the Moorland Forum are asked to keep their own members and supporters up to date with progress through their own networks.  An outline briefing will be prepared that Forum members may wish to adapt for their own use.

I will be at the Scottish Game Fair for the next three days, along with several other members of the Forum and this will provide an opportunity to discuss the project.  A postcard promoting the project has been printed so that web & blog details for the project can be given easily to anyone who shows an interest.
Posted by Simon Thorp at 23:33 No comments: