A link has been added to the website to give access to the GWCT's update about the National Gamebag Census.   This contains interesting information on 'Trends in Corvid Species' and 'Mountain hare bags and distribution in Scotland.'
Posted by Simon Thorp at 10:32 No comments:

The James Hutton Institute’s Chief Operating Officer has been named as Dr Karen Shaw.  Currently, she is working at the University of Manchester as Head of the University Research.  Dr Shaw (46) will start work in Aberdeen and Invergowrie at the end of January.  More details


Professor Iain Gordon has been appointed as the Chief executive and the new Institute will take over the  work of the Macaulay and SCRI Institute on 1 April 2011.  More details about the Hutton Institute
Posted by Simon Thorp at 11:11 No comments:

The Culling of Mountain Hares

As a result of the concerns amongst some Forum members about the content of the articles about culling of hares that appeared in recent newspapers,  (see the post on 11 January about the 'Scotland on Sunday' article published on 9 January), the following letter has been sent to the editors of the papers that carried the story:
Dear Sir,
Your article relating to hare culls in Scotland is inaccurate. Scottish moors can continue to harvest hares without fear of compromising their European conservation status.
Over the years mountain hares have become an important asset for many estates in  Highland Scotland. This is because management for red grouse, notably improving habitat and controlling predators, has allowed mountain hare populations in Scotland to build densities up to 10 times greater than seen anywhere else in Europe. Indeed, some moors need to do so in order to enhance and protect the very moorland management hares have come to depend on. This issue has been discussed by Scotland’s Moorland Forum without major concerns being raised.
When sheep treated with tick killing (rather than attracting) chemicals are present and there are few deer to support the tick population, hare densities have sometimes had to be reduced to suppress viral disease of sheep and red grouse. This ultimately protects the investment in heather moorland which both hares, grouse and tourism depends upon. Similarly, some suppression of hare population densities may be necessary on some occasions to allow woodland regeneration.
Of the reported 25,000 hares culled per year it has to be considered in the context of a national population of around 350,000. In real terms, any cull representing less than 10% of a population is entirely sustainable.  Allegations of local ‘over-culling’ have never been quantified and given the range over which eagles hunt are unlikely to have consequential impacts on raptors. Recent research by Game & Wildlife Conservation Trust, SNH and the Macaulay Institute it was found that the range of mountain hare had not changed – a sign of a healthy population.
We recognise it is good practice for moorland managers to consider the impact of their actions on their own and neighbouring hare populations. Therefore we welcome, with some adjustments, the hare closed season in Wildlife and Natural Environment Bill. But moors must also take account of the need to secure the future of the key driver of the hare population, investment in red grouse shooting.
Yours faithfully,
Game & Wildlife Conservation Trust
Scottish Rural and Property Business Association
Scottish Gamekeepers Association
British Association of Shooting and Conservation (Scotland)
Scottish Countryside Alliance
Scottish Estates Business Group
The Heather Trust
Posted by Simon Thorp at 16:08 No comments:

Speak Up for Scotland 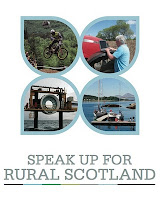 The Analysis Report of the consultation, which generated 131 written responses, has now been published and can be accessed from the SG website.  It is available as the full report or in an abbreviated version.
Some highlights from a Forum perspective:

Read the John Muir Trust news release on landscape issues and the European Landscape Convention.
Posted by Simon Thorp at 08:56 No comments:

The Culling of Mountain Hares

See the article from Scotland on Sunday on 9 January 2011.

To cull or not to cull?

(see the response from some Forum members in the post on 12 January)
Posted by Simon Thorp at 08:46 No comments:


Chris Wernham (BTO Scotland) has provided the following information and appeal:
This massive project to document the current distribution of birds, by 10km square blocks, throughout Britain and Ireland is coming to the end of its fourth and final year of winter fieldwork.  Data collection ends on 28 February.
Although moorland habitats only tend to support low densities of birds, in mid winter they do hold important populations of many species such as Red and Black Grouse and raptors like Golden Eagles. Having experienced two severe winters in a row now, our volunteers have had difficulties in accessing moorland areas.  Many Moorland Forum members are out and about on the moors throughout the winter and are no doubt seeing birds. Your records could be really useful to help us produce accurate distribution maps. Look at the map of Red Grouse distribution.  Are there any gaps you could fill?
The project website allows you to enter “Roving Records” for any square in the country. Log in to the website and click onto the Submit Roving Records button. A handy Google map (top right) allows you to zoom in to your recording site and informs you (below the map) which 10km square you are in. It is then easy to add records using the submissions sheet.
The Any Square Summary button allows you to see which birds have been recorded so far in any 10km square in the country. Any species not on the list that you know to be present in a square should be added as a Roving Record.
It is also worth checking out “Bird of the Day”. Each day a different species is picked at random and a map appears of its current distribution as shown by Bird Atlas 2007-11 data so far.  Join the thousands of other volunteers that click on it to find out which species is highlighted each day.
For further information please contact Bob Swann, Scottish Organiser, Bird Atlas 2007-11.
Posted by Simon Thorp at 12:52 No comments:

Following the merger with DCS, SNH has taken on a larger wildlife management role.  In response to a request, views about this expanded role were submitted to SNH on behalf of the Forum in late December.  For members of the Forum, details can be downloaded from the member's section of the website.  I would be pleased to provide non-members with a copy on request.
Posted by Simon Thorp at 15:13 No comments:

The Forum's website has a link to this initiative that lists 25 key questions and answers about issues that affect rural areas all of which are relevant to the work of the Forum.
Posted by Simon Thorp at 14:53 No comments: