Scottish Borders Land Use Strategy pilot
‘Consultation on the draft Framework and
Map based information’
Please come along to one of the 4 public meetings being held across the Borders to discuss the draft Land Use Framework: 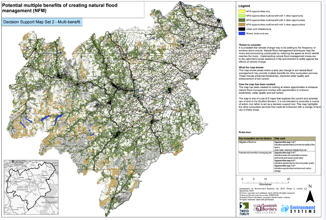 Evening Programme for the Consultation Events

After almost 18 months of widespread discussion, the draft Land Use Framework and Maps are available for public consultation and we are hosting a series of LUS pilot consultation events. At these events, a short presentation will be made on the draft Framework document. This will be followed by a discussion regarding the various maps generated. More information is available overleaf. It would be appreciated if you could let us know of your intention to attend, by e-mailing:
derek.robeson@tweedforum.org.

The consultation documents and maps are available to view for your interest and comment on the Council's website at:

A set of consultation questions is also available on the Council's website for completion via an online web form, or via a download document if you prefer to submit your response by email or post to lus@scotborders.gov.uk or Land Use Strategy pilot consultation, Built & Natural Heritage, Regulatory Services, Newtown St Boswells TD6 0SA. The closing date for consultation responses is 16th February 2015.

Ahead of the meeting, it would be beneficial to have looked at the on-line documents, and maps, so we can discuss them. The questions are listed below:

Question 1:
Does the Framework document provide enough background information to explain the pilot?

Question 2:
Are you satisfied with the process undertaken to produce the Framework?

Question 3:
Are you satisfied with the stakeholder consultation undertaken to produce the Framework?

Question 7
Are you satisfied with the Interim action plan?

Question 8:
Are you satisfied with the set of potential national, regional and local actions as proposed in the Postscript?

Questions 9 &10: Refer to actions for organisations to consider

Question 11:
Do you feel that the proposals for Monitoring and Assessment of this pilot are adequate for the purpose?

Question 12: Do you have any further comments you would like to make?
Posted by Simon Thorp at 22:31 No comments:

Email ThisBlogThis!Share to TwitterShare to FacebookShare to Pinterest
Labels: Land Use Strategy

The initiative seeks to establish effective but sustainable management of mountain hares. Mountain hare populations are under threat from habitat loss, fragmentation, and in some areas, from large, local culls on grouse moors. Although not a fully protected species, the UK is obliged to ensure that the status of hare populations is not threatened in any way.

For further details see the press release as reported on the GWCT Blog.
Posted by Simon Thorp at 18:24 No comments: