The latest newsletter from the Scottish Moorland Group is published.
Posted by Simon Thorp at 06:46 No comments: 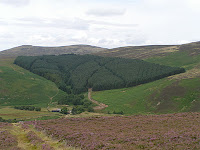 The Woodland Expansion Advisory Group (WEAG) has been established in response to The Scottish Government's wish to increase the amount of woodland cover in Scotland from 17% to 25%.  The WEAG has established a consultation process which closes on 6 January 2012 and a copy of a letter that was sent by the Group to stakeholders can be downloaded from the FCS website.

The Forum will be submitting a consultation response and the intention is to base this on the paper that was prepared by a Forum task group in 2008.  Some of the recommendations that related to the need for a coordinated land use policy have been addressed by the development of the Land Use Strategy, but most of the paper is as relevant now as it was in 2008.

The WEAG has announced a series of seven stakeholder events across Scotland between 21 February and 1 March 2012, and details can be found on the WEAG page of the website.

The success of the 2011 Scottish Grouse season

The Scotsman has published two articles that describe how memorable this year's grouse season has been and how the income the sport has generated will be of benefit to moorland management, to biodiversity and to local communities.

The articles have been mentioned in separate posts on the Heather Trust's blog:

The European nature Trust's latest newsletter will be of special interest to those with an interest in peatland management.  There is a description of using voluntary carbon management to fund peatland restoration.
Posted by Simon Thorp at 19:38 No comments:

The JHI newsletter published on 16 December 2011 can be downloaded here.  There is an option to sign up for future editions.
Posted by Simon Thorp at 18:45 No comments:

Mar Lodge is owned by the National Trust for Scotland and is close to Braemar.  The management of this  estate has been controversial of late, particular over the deer management and muirburn policies.  There has been concern about the reduction in deer numbers and the impact that this will have on stalking enterprises on neighbouring estates.  The lack of a full muirburn programme has also left neighbours worrying about wildfire risk.

NTS commissioned an independent report and this is available to download.  To quote from the report, it is interesting to note that, "part of the initial aspiration for the Estate was to demonstrate that conservation and sporting objectives are not necessarily mutually exclusive, but that with sensitive management, both can be accommodated."  The report considers different scenarios: two variants of the status quo, and then minimum and medium intervention policies; it then makes a series of recommendations.